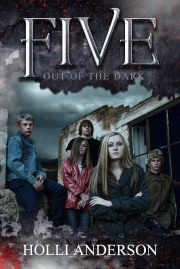 I gave Five – Out of the Dark 3-1/2 stars. I had fun reading this urban fantasy world. The book had enjoyable characters and a descent plot. A lot of the ideas resonated with other stories that I’ve read.

At first, the story felt a little rushed. I struggled through the first 25%. However, once I got through that part, it turned into a much better read. The story didn’t disappoint and I finished the book a few days later.

Parts of the book passed the “keep me up reading” test. I read past midnight two nights and had to stop myself from staying up late.

Five is definitely a fun read. I recommend it for young teenage boys and girls everywhere.

Also Five: Out of the Pit (Book 2) is out. The first book is plenty good enough to warrant buying book 2 as well.

Five: Out of the Dark (Five #1) by Holli Anderson was published by Curiosity Quills Press on August 20, 2013. It is 267 pages long and targeted toward young adults.

Five kids who can use magic are pulled toward each other. The meet in Seattle and live on the streets (or under them) together fighting the evil that goes unseen by ordinary people. A string of paranormally suspicious suicides in a nearby high school sets them on a quest to save the students. All the while they have their own problems they are dealing with as well, such as curing Lyconthropy.

I didn’t highlight any typos, so you will be happy to know this book is pretty much typo free. However, I made 55 highlights, almost all were editing issues beyond your typical typo. This is a great example of why a good editor does more than spell checking.

There were some distracting comma problems. OK, let’s be real. The commas went crazy. Commas immediately after a conjunction should be rare, if ever, not almost always. I didn’t even highlight the all. When your comma’s are bad to the point of being distracting to the reader, it means the editor didn’t do a good job. Commas after conjunction stats: but (419)

There were multiple places where the sentences were confusing. More often than usual, I had to re-read sentences to understand them. This is where and editor or proofreader should step in. Every author writes confusing sentences. But having editors and proofreaders highlight sentences that are confusing and ask for them to be clarified can really help.

Also there were a few writer’s convenience moments. In fact, one of them was the utterly cliche “by the way I know karate” moment, which is such an obvious and well-known faux pas that it’s appearance was doubly shocking. Such character skills should be introduced and developed, so they don’t come across as the result of writer’s convenience.

The imagination was solid. She built her world in Seattle around the Five and her world came to life in my mind as I read.

While a lot of the ideas resonated with other stories that I’ve read, I found very little that stood out as unique in this book. This book had young adult characters using urban fantasy magic. I really wish there was something unique I could point to.

Out of the Five, the main character is Paige. She starts to use magic and ends up running away. She finds herself running into Jonathan, who also becomes one of the five. He also becomes her main crush.

Alec, Seth, and Halli join up soon after. Halli has no memory of her past.

Jonathan is bitten by a changeling. The affect it has on him hinders Paige and his relationship. The pinnacle of the story hinges on what Paige is willing to do to save him.

I think Paige and Jonathan and Halli and well done. Alec is more of one dimensional side character who likes to tease. To me, Seth was the most fuzzy character. I felt like I never clearly envisioned him.

The magic came on fast. The information about the world was pretty much dropped in a sentence or two. We go from having met a single demon to suddenly this:

We stayed out of human affairs and concentrated our efforts on the un-human. On dark forces like Demons and the evil men who summoned them. Or baby-stealing Faeries, flesh-eating Trolls, annoying Goblins, and other such nefarious creatures.

I would have liked to have been shown the world subtlety throughout the story, but instead the mystery of the world was ripped away by that unnecessary sentence.

As the characters use magic, they get tired. Magic had adverse affects on technology.

Quality: Average in regular mode but Poor in night mode.

The eBook was easy to read. There were little to no eBook formatting issues. With the regular white background and black text, the eBook is great.

Unfortunately, all the images had white backgrounds and were blaring white in night mode. Chapters had huge images with too much white. The drop caps and separators were done with white-background images too. It really makes me wonder if Curiosity Quills has anyone with any experience creating eBooks. Don’t use white-background images for letters, no, not even drop caps. Especially not for the “Chapter Three” heading. And the image wouldn’t be so bad if the surrounding background was transparent and they had only left a one or two pixel white outline around important part of the image.

Profanity: There was no swearing that I remember.
Sexuality: Nothing beyond a kiss.
Violence: There was a little blood here and there. Nothing of major note.

Though the character’s ages are young adult, I think Five: Out of the Dark is clean enough for all ages, from middle grade on up.

We sat by Holli at a book signing at a writers conference. She is as nice as a woman can get. She has a Bachelor’s Degree in Nursing and has a particular love for anything fantasy.

She is a member of the Utah Fantasy Authors group and will be signing copies of her book at the Salt Lake City Comic Con this coming September 4, 5, 6 of 2014.

Along with her husband, Steve, and their four sons, she lives in Grantsville, Utah—the same small town in which she grew up.

We need to ask Holli how she grew up in Grantville all her life but somehow chose Seattle as the setting for her book.