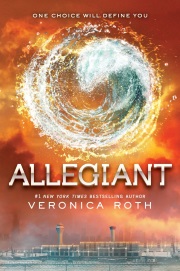 A lot of people are giving this book low stars. I gave this 4 stars because . . . well, Veronica Roth must have iron writers armor and a keyboard of steel. She wrote with power and wrote the story exactly how it should of ended. I know a lot of people complain about the ending, but sometimes, well-written and real life endings are extremely hard for some readers.

Allegiant by Veronic Roth was published by Katherine Tegen Books in October 2013. It had 545 pages.

Tris and Tobias leave Chicago, everything they have ever known, and see the surrounding world only to find out the people outside their windy city are not quite as oblivious of Chicago as they were led to believe.

So in this third book, Veronica switches points of view between Tris and Tobias. This was not executed well. The only difference between the points of view was that under each chapter heading, the point of view character was listed: Tris or Tobias.

This POV switching didn’t work well for me. After two books of exclusively Tris’s point of view, Veronica needed to write in some obvious tag at the start of each Tobias chapter. Multiple times I was pages into the chapter before I realized the point of view was Tobias’s.

Also, I didn’t get the feel that Tobias had his own personality. In writing his chapters, Veronica really needed to give him his own voice. It seemed like we were getting Tobias’s point of view from Tris’s voice. To make matter’s worse, Tobias’s voice wasn’t exactly a man’s voice.

However the content editor should have helped with the point of view issues.

The imagination seemed quite limited. Veronica let us out of Chicago but she didn’t seem to be able to show us the world very well. We got to see a single government facility and a single fringe neighborhood.

There were a lot of ways the outside world could have gone. Being stuck in a government facility the whole book, except for Tris’s single trip to the fringe, which while good, was not enough on its own.

This is the third book, so by now we are all familiar with Beatrice Prior (Tris) and Tobias Eaton (Four), and their budding romance. Though the relationship wasn’t as awesome as it could have been after last been when it seemed so stressed. There relationship was once again stressed.

The addition of a few characters from outside helped this book along. However, Tris and Tobias remained the focus.

There were a lot of side characters and that made it hard to focus on any particular side plot and this story really needed some better side plots.

Veronica Roth is from Chicago, in fact, she and her husband still live there.

While a student, she often chose to work on the story that would become Divergent instead of doing her homework.

I am going suggest that you do your homework first and stay in school.

Apart from writing and reading, I like to cook.

After this series we know that Veronica has no qualms about killing characters and we love to hate her for it.

1 thought on “Allegiant by Veronica Roth”